Is the Sun Being Bad for You Actually Just a Myth?

We often hear that too much sun will give us skin cancer and that we have to protect ourselves from its rays. Turns out, that may actually just be a myth.

“Avoid the sun, it will give you skin cancer, use lots of sunscreen, wear protective clothing and hats…” It goes on and on, we’ve all heard these statements.

Yet, have you ever heard this statement:

I am sure you never heard your doctors tell you this. Why?

Could you imagine your doctor telling you this? Your dermatologist?

“Sunlight is a risk factor for skin cancer, but sun avoidance may carry more of a cost than benefit for overall good health,” he writes.

Another study published in the journal Public Health Nutrition in 2011 also concluded that:

“The overall health benefit of an improved vitamin D status may be more important than the possibly increased CMM (cutaneous malignant melanoma) risk resulting from carefully increasing UV exposure. Important scientific facts behind this judgment are given.”

Even though Weller is ahead of the pack in recognizing the importance of sun exposure, he and most other physicians don’t understand why this is so. There are many reasons, but two large ones are:

Is Avoiding the Sun as Risky as Smoking?

A study driving home this risk-benefit reality was done in Sweden. More than 25,500 Swedish women between the ages of 25 and 64 were followed for 20 years. Detailed information about sun exposure habits and confounding factors were obtained and analyzed in a “competing risk” scenario. Overall, women who got regular sun exposure did have a higher risk for melanoma compared to sun avoiders, but they also had a lower all-cause mortality risk, likely due to their increased vitamin D levels.

Women with active sun exposure habits ended up having a lower risk of cardiovascular disease and non-cancer death compared to those who avoided the sun. According to the authors:

In short, if you’re concerned about mortality, and not just mortality from one specific disease (melanoma), the scales are decidedly tipped toward sun exposure being of tremendous benefit.

However, we do want sensible sun exposure but we do not want to burn the skin.

Is Sunscreen the Answer?

Avoid shielding yourself from the sun’s rays by slathering on chemical sunscreens, many of which have been linked to an increased risk of skin cancer, as noted by clinical laboratory scientist Elizabeth Plourde, Ph.D.

We have always been told that the sun causes skin cancer, even though generations of humans for thousands of years have been exposed to the sun most of their life and never developed cancer. Dr. Plourde tells us it’s actually the sunscreen that will increase your risk to cancer.

Researchers estimate sunscreen-wearing beachgoers introduce as much as 6,000 metric tons of sunscreen into the world’s oceans each year.

Oxybenzone may be the worst of all the chemicals used in sunscreens.

While some sunscreen manufacturers have switched from oxybenzone to avobenzone, no studies have been done to confirm whether avobenzone is actually a safer choice. Chances are, it’s not.

Disturbingly, recent research by the Center for Disease Control and Prevention found 96 percent of the U.S. population has oxybenzone in their bodies, and this chemical is a known endocrine disruptor linked to reduced sperm count in men and endometriosis in women.

At least nine of the sunscreen ingredients the U.S. Food and Drug Administration (FDA) has approved are known endocrine disruptors.

Many sunscreens also contain vitamin A and/or its derivatives, retinol and retinyl palmitate, which have been linked to an increased risk of skin cancer by increasing the speed at which malignant cells develop and spread. 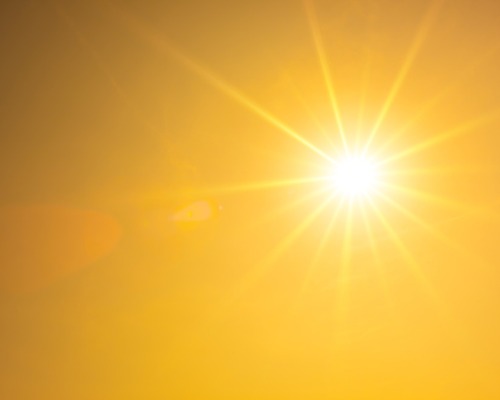 Spray-on sunscreens pose an additional hazard by releasing toxic particles into the air. The FDA has previously expressed concern that inhaling these products may be risky, especially to children, and has warned parents to avoid spray-on sunscreens.

The two agents of greatest concern are zinc oxide and titanium dioxide, as these are the two most often used in spray-on sunscreen products. These two minerals are the safest topical sunscreen agents around, but inhaling them is a whole different story.

Most studies to date have shown that zinc oxide and titanium dioxide are safe and unlikely to penetrate your skin when applied topically, as long as they are not nanosized.

But when these minerals are inhaled, they have been shown to irritate lung tissues and potentially lead to serious health problems, and the finer the particles, the worse their effects appear to be.

As mentioned, one of the primary risk factors of skin cancer is sunburn, which is an inflammatory process. Aside from paying careful attention to covering up before you get burned, you can reduce your risk of sunburn by eating plenty of antioxidant-rich fruits and vegetables, and/or taking an astaxanthin supplement. The latter has been shown to work as an effective internal sunscreen, protecting your skin from UV radiation damage.

When choosing a sunscreen, your safest choice is a lotion or cream with zinc oxide. It’s stable in sunlight and provides the best protection from UVA rays. Your next best option is titanium dioxide. Just make sure the product:

Keep in mind that SPF protects only from UVB rays, which are the rays within the ultraviolet spectrum that allow your skin to produce vitamin D. The most dangerous rays, in terms of causing skin damage and cancer, are the UVA rays. Avoid sunscreens with an SPF above 50.

While not intrinsically harmful, the higher SPF tends to provide a false sense of security, encouraging you to stay in the sun longer than you should. Moreover, higher SPF typically does not provide much greater protection. In fact, research suggests people using high-SPF sunscreens get the same or similar exposure to UV rays as those using lower-SPF products.

Each year, the Environmental Working Group (EWG) ranks sunscreens based on their effectiveness and safety of ingredients. This year, nearly 1,500 sunscreen products, including beach and sport sunscreens, moisturizers with SPF, and SPF-containing lip balms, were reviewed.

As you can imagine, most popular commercial sunscreens are not on the safe list. Here are better options: